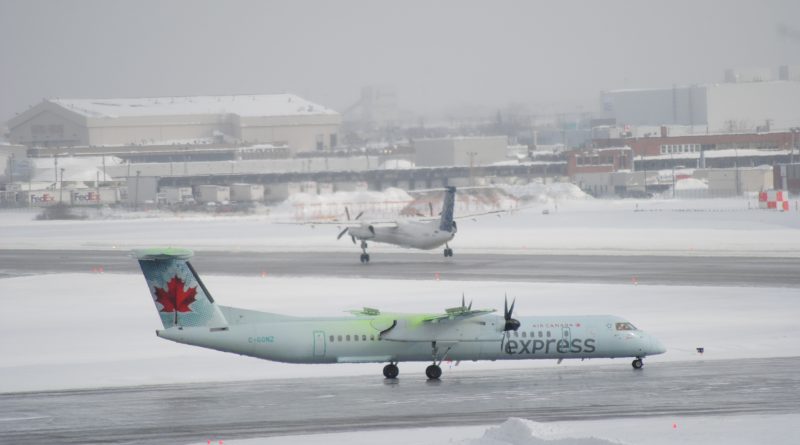 « I’m very pleased with the significant progress made in 2017 towards our vision of delivering regional aviation to the world, » said Joe Randell, President and Chief Executive Officer, Chorus.  « The successful launch of Chorus Aviation Capital and its rapid build to a global business has propelled the value of Chorus’ portfolio of leased aircraft to over one billion dollars and demonstrated the strength of our growth and diversification strategy. We have been methodical and deliberate in deploying the $200 million gross proceeds from our convertible debt unit financing with Fairfax Financial. Within a relatively short period of time we’ve concluded leasing agreements with eight well-established regional carriers in eight countries located on six continents. We have strong momentum.

« Our expertise in aircraft engineering, maintenance, repair and overhaul coupled with our experience in all other areas of regional operations is what differentiates us from the competition. We’re demonstrating our ability to leverage and capitalize on the entire lifecycle of an aircraft – from its origination, to conducting modifications and engineering to accommodate customer needs, including life extension programs on aircraft – to repurposing aircraft and marketing them for flying contracts or disassembly for parts provisioning.

« From a financial point of view, our contract flying and maintenance, repair and overhaul businesses performed according to our expectations and contributed to increases in all key financial metrics including growth in adjusted EBITDA and adjusted net earnings of 15 and 12 percent respectively year over year. I am grateful to our employees for their hard work and for recognizing the power of our vision.

« We finished 2017 on a very positive note when we returned to the S&P/TSX Composite Index – a strong endorsement of our strategy to transform our organization to a worldwide leader in providing regional aviation services. The focus in 2018 will be relatively consistent with 2017 – to execute on our foundational businesses in Jazz and Voyageur, and to leverage our industry relationships and expertise as we continue to build Chorus Aviation Capital, » concluded Mr. Randell.

The Chorus group of companies accomplished several strategic initiatives in support of its corporate objectives to grow and diversify the business, and improve its cost competitiveness. Highlights of 2017 included:

To date CAC has acquired:

Effective February 1, 2018 Chorus implemented a DRIP that allows Chorus to offer a discount of up to 5% from the average market price for shares purchased under the DRIP. Chorus is currently offering a discount of 4%. Details are provided at http://chorusaviation.ca/dividend-reinvestment-plan.

The DRIP provides shareholders who are resident in Canada the opportunity to purchase additional Chorus shares using cash dividends paid on shares enrolled in the DRIP. All shares purchased under the DRIP are newly issued by the Corporation from treasury, and the proceeds received by Chorus are used for general corporate purposes. Some of the benefits of participating in the DRIP include the current discount of 4%, the convenience of automatic reinvestment, savings from not having to pay brokerage fees or other service charges for shares purchased under the DRIP, and the ability to acquire fractional shares.

The $37.5 million increase in adjusted EBITDA was primarily driven by:

These increases were partially offset by:

Adjusted net income was $114.5 million for the year, an increase from 2016 of $12.5 million, or 12.2%. The change was a result of the $37.5 million increase in adjusted EBITDA previously described, plus a $16.3 million decrease in income taxes and a year-over-year decrease of $2.0 million in foreign exchange losses related to working capital; partially offset by:

This was offset partially by a $4.6 million increase in employee separation program costs in 2017 over 2016.

The $13.2 million increase in adjusted EBITDA was primarily driven by:

These increases were partially offset by:

Adjusted net income was $23.4 million for the quarter, a decrease from the fourth quarter of 2016 of $7.8 million, or 25.1%. The change was a result of the $13.2 million increase in adjusted EBITDA previously described, partially offset by:

Net income was $19.7 million for the quarter, an increase of $7.1 million from the fourth quarter of 2016. The increase was due primarily to a $10.2 million reduction in unrealized foreign exchange losses on long-term debt, a $1.0 million decrease in employee separation program costs and the absence of strategic advisory fees of $3.7 million incurred in 2016; offset by the previously noted $7.8 million decrease in adjusted net income.

Chorus intends to continue growing its regional aircraft leasing business through CAC by leveraging the proceeds from the private placement of convertible debt units to acquire aircraft for lease to regional aircraft operators. CAC has invested approximately 70% of that capital to date and intends to deploy the balance by mid-2018 leveraging the remaining capital with further debt financing at a ratio ranging between three and four to one, to acquire new to mid-life regional aircraft for lease. Chorus is currently examining options for future financing arrangements to sustain the growth in the leasing business.

Based on 2017-2018 winter schedule, the 2018 summer schedule and updated planning assumptions from Air Canada, Billable Block Hours under the CPA for 2018 are expected to be between 350,000 and 375,000 hours based on 116 Covered Aircraft as at December 31, 2018. The actual number of Billable Block Hours for 2018 may vary from this anticipated range due to a number of factors, see Section 9 – Risk Factors. The CPA fleet transition to larger aircraft will generate approximately 3% more available seat miles in fiscal 2018 over the same period in 2017.

Capital expenditures for 2018, excluding those for the acquisition of aircraft and the ESP, and including capitalized major maintenance overhauls, are expected to be between $44.0 million and $50.0 million.

This is a listen-in only audio webcast. Media Player or Real Player is required to listen to the broadcast; please download well in advance of the call.

The conference call webcast will be archived on Chorus’ website at www.chorusaviation.ca under Reports > Executive Management Presentations. A playback of the call can also be accessed until midnight ET, February 22, 2018 by dialing toll-free 1-855-859-2056, and passcode 8382614#.

This news release references several non-GAAP measures to supplement the analysis of Chorus’ results. These measures are provided to enhance the reader’s understanding of our current financial performance. They are included to provide investors and management with an alternative method for assessing our operating results in a manner that is focused on the performance of our ongoing operations and to provide a consistent basis for comparison between periods. These non-GAAP measures are not recognized measures under GAAP, and therefore they are unlikely to be comparable to similar measures presented by other companies. A reconciliation of these non-GAAP measures to their nearest GAAP measure is provided in Management’s Discussion and Analysis (‘MD&A’) dated February 14, 2018.

EBITDA is defined as earnings before net interest expense, income taxes, and depreciation and amortization and is a non-GAAP financial measure that is used frequently by companies in the aviation industry as a measure of performance. Adjusted EBITDA (EBITDA before signing bonuses, employee separation program costs, strategic advisory fees and other items such as foreign exchange gains or losses) is a non-GAAP financial measure used by Chorus as a supplemental financial measure of operational performance. Management believes Adjusted EBITDA assists investors in comparing Chorus’ performance by excluding items, which it does not believe will occur over the longer term (such as signing bonuses, employee separation program costs and strategic advisory fees) as well, which items that are non-cash in nature such as foreign exchange gains and losses.

During the first quarter of 2017, Chorus revised its definition of Adjusted EBITDA to include signing bonuses, employee separation program costs and strategic advisory fees to facilitate transparency and comparability as these items can fluctuate from period to period. Adjusted EBITDA should not be used as an exclusive measure of cash flow because it does not account for the impact of working capital growth, capital expenditures, debt repayments and other sources and uses of cash, which are disclosed in the statements of cash flows, forming part of Chorus’ financial statements.

This news release should be read in conjunction with Chorus’ audited consolidated financial statements for the years ended December 31, 2017 and December 31, 2016, and MD&A dated February 14, 2018 filed with Canadian Securities Administrators (available at www.sedar.com).

Forward-looking information relates to analyses and other information that are based on forecasts of future results, estimates of amounts not yet determinable and other uncertain events. Forward-looking information, by its nature, is based on assumptions, including those described below, and is subject to important risks and uncertainties. Any forecasts or forward-looking predictions or statements cannot be relied upon due to, amongst other things, external events, changing market conditions and general uncertainties of the business. Such statements involve known and unknown risks, uncertainties and other factors that may cause actual results, performance or achievements to differ materially from those expressed in the forward-looking information. Results indicated in forward-looking information may differ materially from actual results for a number of reasons, including, without limitation: risks relating to Chorus’ economic dependence on and relationship with Air Canada; risks relating to the airline industry (including the international operation of aircraft in developing countries and areas of unrest); aircraft leasing (including the financial condition of lessees, availability of aircraft, access to capital, fluctuations in aircraft market values, competition and political risks); the failure of Chorus or any other party to satisfy conditions precedent to the closing of anticipated transactions; energy prices, general industry, market, credit, and economic conditions (including a severe and prolonged economic downturn which could result in reduced payments under the CPA); increased competition affecting Chorus and/or Air Canada; insurance issues and costs; supply issues and costs; the risk of war, terrorist attacks, aircraft incidents and accidents; fraud, cybersecurity attacks or other criminal behaviour by internal or external parties; epidemic diseases, environmental factors or acts of God; changes in demand due to the seasonal nature of Chorus’ business or general economic conditions; the ability to reduce operating costs and employee counts; the ability of Chorus to secure financing; the ability of Chorus to attract and retain the talent required for its existing operations and future growth; the ability of Chorus to remain in good standing under and to renew and/or replace the CPA and other important contracts; employee relations, labour negotiations or disputes; pension issues and costs; currency exchange and interest rates; debt leverage and restrictive covenants contained in debt facilities; uncertainty of dividend payments; managing growth; changes in laws; adverse regulatory developments or proceedings in countries in which Chorus and its subsidiaries operate or will operate; pending and future litigation and actions by third parties. For a further discussion of risks, please refer to 2017 Annual Information Form dated February 14, 2018. The statements containing forward-looking information in this discussion represent Chorus’ expectations as of February 15, 2018, and are subject to change after such date. However, Chorus disclaims any intention or obligation to update or revise any forward-looking information whether as a result of new information, future events or otherwise, except as required under applicable securities laws.